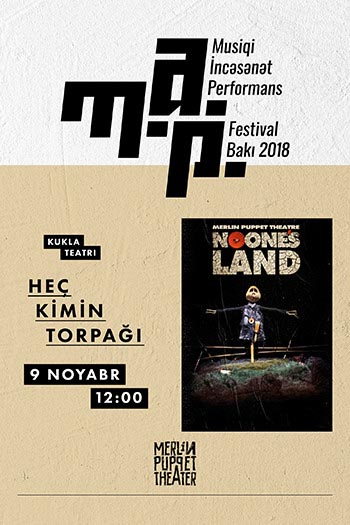 Merlin Puppet Theatre was founded in Athens in 1995 by Dimitris Stamou and Demy Papada. Initially, they were producing masks and puppets for other groups, but over time they began performing themselves. Since they have begun performing, they performed in theatres, participated in festivals, exhibitions and conferences, and gave workshops in more than thirty countries around the world. Currently, Merlin Puppet Theatre is located in Germany and is a combination of different puppetry techniques: marionettes, table puppets, objects, optical effects and shadow play.

The power of imagination against the boring reality — this story is told through the eyes of a scarecrow, a lonely creature, eternally spiked at the same point, with no horizon and no chance of escape from an environment that he has not chosen. But even in this situation, the main hero has a choice, and then he chooses to make this world a better place. Noone’s Land is a story about freedom, told without any spoken words, only with the use of visual and optical effects. The performance is designed for the whole family.

Duration: 45 minutes (with no intermission)

Events can be visited by:
From 4+ age