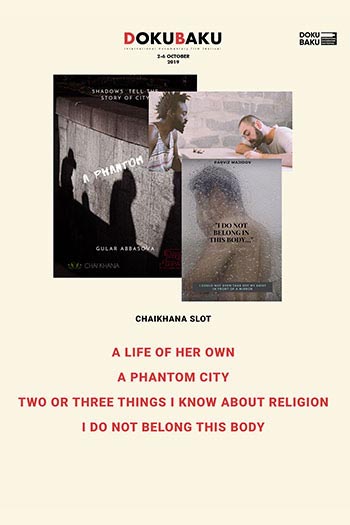 A life of Her Own

After 39 years spent independence and isolation, Nunu decides to leave her traditional family in Svaneti and she moves to the capital. Living alone in an unfamiliar city, she tries to learn to be herself. But as a person with a disability, Nunu struggles with her identity as a woman and as a professional. The film follows a strong character on her journey and her desperate search for the adventures she has never experienced before.

Although it is an ancient city, for me Tbilisi has a young and inspirational spirit. It is a space with a unique contrast. It is a free and, sometimes, a rebellious city,” says Gular Abbasova, who lived in the Georgian capital for a year and a half as a student. In her short poetic film, Abbasova explores Tbilisi’s human-built environment in an unusual way: using only sounds, lights and shadows, she carves out the shape of Tbilisi, creating a portrait of the city that captures its conflicting narratives of joy, sorrow and mystery. “Almost nothing stays in the shade and nothing is lost in the shadows here. It’s easy to communicate with the city,” Gular says.

Two or three things I know about religion

It’s a religious group, which, like others, attracts followers with its promises. But the main reward of the Georgian Christian Evangelical Protestant Church -- avoiding Georgia’s compulsory military service -- comes in this life rather than in the hereafter. The Church, registered by the Girchi (Pinecone) Party in 2017, offers male Georgians between the ages of 18 and 27 the chance, as allowed under Georgian law, to suspend their compulsory, year-long military service by becoming clergy. It has no other faith. Thousands – some 7,000, to be exact – of young people appear ready to sign on. Most are doing so to dodge conscription. They complain about conscripts’ inadequate pay (reportedly 75 laris or $30 per month) and menial work. The Georgian defence ministry did not respond to a Chai Khana request for comment in time for publication. Pro-government MPs, however, strongly oppose Girchi’s “faith” initiative.

I do not belong in this body…

Devran, a 23-year-old transman, has left his home in western Azerbaijan to seek hormonal therapy for gender transformation surgery.
But in Azerbaijan, few doctors or health clinics are willing to treat transgender people. While there are more options in the capital Baku than in his hometown of Shamkir, Devran still faces prejudice and discrimination when trying to obtain even basic medical treatment. The only doctor willing to see Devran as a patient is Hakan Tanriverdi, a Turkish gynaecologist working in Baku. Through Devran's story and interviews with Dr Tanriverdi, filmmaker Parviz Majidov documents the difficulties the LGBTIQ+ community faces to find gender transitioning services in a society that puts a taboo on sexuality and sex.

Events can be visited by:
From 0+ age